A Message from Deschutes CEO MacGregor B. Hall

Over the past five years I have had the pleasure of touring the Western US once or twice a year on motorcycles with a group of friends. This year we rode from Portland Oregon through Klamath Falls to Susanville California, ultimately staying in Death Valley. From there we rode onto Bakersfield, to Salinas and through the central valley south of San Francisco. Finally, our last ride home was via the 101 route from Eureka, California. We were astounded at the activity wherever we went from traffic, commerce, tourism, crowded parks, roads, airports, restaurants, and motels. In the Salinas valley the harvest of fresh vegetables was in full production and the roads were clogged with bustling trucks more than ever before. In Napa Valley, hotel room prices and wine tasting fees have nearly doubled in just two years due to overwhelming demand. With everything being either sold out or nearly so, it is clear to see the consumer in California is alive and well as they are elsewhere today.

We hear similar anecdotal stories wherever we go in the West. The West and southwest in particular are booming. So too are the suburban areas around Portland, but unfortunately the city is still mired in a sort of suspended animation. We all hope Portland will recover as it was and still can be a beautiful place to visit and live.

So what does all this have to do with the financial markets and you?

Sometimes it seems, there is a disconnect between Wall Street and Main Street, which certainly appears true today. The economy is recovering quickly from the Covid induced slowdown, unemployment is at near all-time lows, wages are soaring, consumers are confident and spending. Unfortunately, prices are also increasing-in fact faster than wages. The Fed is now concerned and is signaling in no uncertain terms that it will reverse the easy money and low interest rate era we have enjoyed over the last five years to fight inflation. The bond and stock markets are reacting as they always do, AHEAD of what is happening now on main street. So even though we experienced a booming economy in California and elsewhere, the financial markets are issuing their doubts about the prospective future of the economy.

The US bond market as an example dropped nearly 10% in the first four months of the year, a record swoon not seen in over 50 years. Stocks started forecasting a slowdown about a 18 months ago, when parts of the market started to decline. Then in 2022, the dam broke and just about all stocks are now suffering from major price corrections. Depending on which part of the market you own, prices have declined between 7% and 25% and sometimes much more. The S&P index is now down 15% from its peak. This is technically known as a “correction”. A normal correction is a decline between 10 and 20% from recent highs and typically lasts four months. There have been 23 of these corrections in the past fifty years. We are now two-three months into this current correction.

The first four months have been an eyeopener and wake up call to all the newly minted day traders and even to experienced sages. The era of easy money and an upwards only market are over for now. Volatility and negativity in the markets is the new norm.

So, you might ask, what should I do now?

Remember that sometimes, doing nothing is a choice and it can be the best one, absent firm convictions about the future. Unfortunately in our current situation, the future is unclear.  Will interest rate hikes and contracting money supply cause a recession? Will inflation spiral and become imbedded, like the 70’s, making it very hard to eradicate? Will Russian aggression and the West’s response result in a major conflict? The reason the markets are down, is in no small part related to all these uncertainties. But is uncertainty rare? The answer is unequivocally No. Throughout history there have been many similar periods. Barring a catastrophic outcome in Ukraine, these periods of anxiety, uncertainty and even despair are often linked to subsequent periods of tremendous opportunity.

Just keep in mind that over the last 20 years (7300 days), if you missed just 30 of the best days in the market, your returns would’ve annualized at .32% vs 9.4%!  Astounding, but just goes to prove the unpredictability of the markets and how crucial it is to hang tight and stay invested. Remember, no one and we mean no one, can consistently and accurately predict market movements. People often crow how they “got out” before a downturn, but when pressed, they admit, they never got back in until “they were certain again”. By then, it was too late and some of those 30 best days flashed by them.

Finally, it is statistically very rare, for the bond and stock market to decline in unison. They most often offer diversification to investors by moving in opposite directions. Therefore, its highly probable that this current trend will conclude and revert back to historical norms. Bonds will most likely cease to lose ground as the fixed income markets have anticipated Federal reserve actions and higher interest rates. While the stock market can definitely trade lower for a longer time period, history indicates that unless this current environment significantly deteriorates, equity markets too, will return to historical spreads above fixed income investments and provide positive returns.

My 35 years in this crazy game have proved its best to keep our heads down when things get stormy. The sun will certainly shine again.

As always my team and I at Deschutes are here to discuss any questions or concerns that may arise. 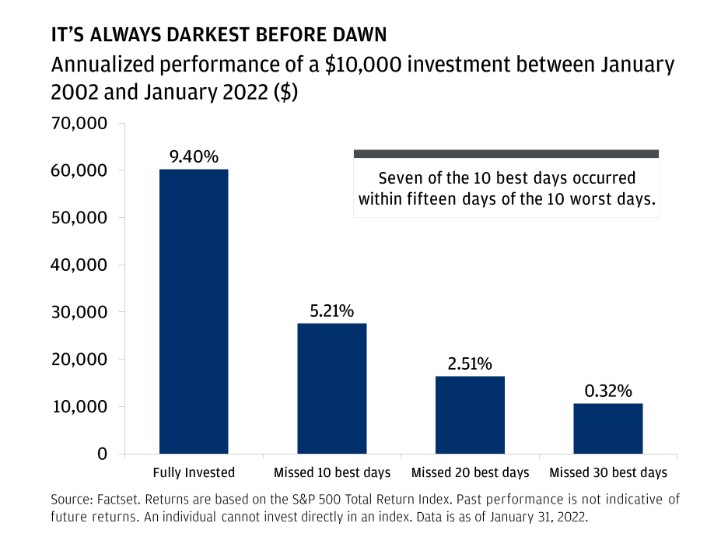